The Buffalo Bills had a pretty dismal preseason with their only win coming in overtime against the Jacksonville Jaguars. After roster cuts made by the Bills it apparent the team is in the sweepstakes for Andrew Luck.

First, there is the starting offensive line. The only definitive starter is center Eric Wood. The starters for the four other offensive line positions are unknown. On top f that they released last year’s starting center Geoff Hangartner without giving him a real shot at the right guard position.

Secondly, there is the depth of the Bills. To put it simply, there is really none. The only positions that has depth are wide receiver, defensive line and linebacker. That means the Bills are up the creek if quarterback Ryan F 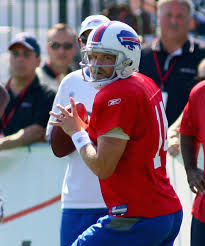 patrick gets hurt for an extended period of time, which will most likely happen with the right side of the offensive line being garbage.

Finally, there are injuries. The Bills had a bundle of injuries during training camp. Even though they weren’t serious, the mere fact that there were double digit number injured players who missed a practice is very alarming.

In the end, it is going to be a long season for Bills fans.

This site uses Akismet to reduce spam. Learn how your comment data is processed.