First, I just want to thank all the readers of this column for sticking around. It has been a long summer for me and my family.

The reason being my son born was born 10 weeks early in April and four months later he is still there in the NICU at Women and Children’s Hospital of Buffalo. He is okay and will be home soon, but we still have a long road ahead.

Well, now that is out of the way let’s get to the main point for this article. That being we now know why the Bills were not spending their $26 million in salary cap space.

Part of that reason is that the Bills signed defensive lineman Kyle Williams to a six year $39 million contract extension. That raises his salary cap figure from $3.75 million to $6.5 million.

With Williams signed the Bills will now turn their attention to wide receiver Stevie Johnson who is in the last year of his deal.

Johnson’s salary cap number is less than a million due to being drafted in the seventh round of the 2008 NFL Draft. Johnson’s new salary cap figure is sure to be in the $10 million range. 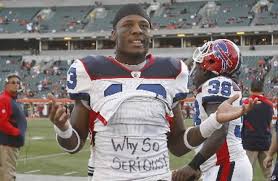 n of the Bills $26 million will be gone with two players.

Finally, there is one other reason that the Bills need the cap space and that is quarterback Ryan Fitzpatrick.

Fitzpatrick is in the last year of his contract as well. That means if Fitzpatrick racks up the same numbers, or more, as he did last year the rest of it will go to him as top NFL quarterbacks make almost $20 million a year.

In the end, as much grief as people gave them the Bills were smart not to listen as letting those guys walk would be even worst. 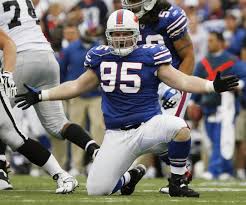 Buffalo Bills defensive lineman Kyle Williams signed a six year $39 million contract extension Friday. Even though Williams had a solid year in 2010, his performance will depend on others in 2011.

Williams has one problem in his game and that is his ability to make plays and hold his ground against double teams. Many of Williams’ plays came against single team blocking or the person performing a combo block did a terrible job.

Teams know this and is the reason why Williams disappeared late in the 2010 regular season.

The Bills recognized this problem by drafting defensive lineman Marcell Dareus in the first round this past April. Dareus so far has lived up to his billing as he has two sacks in two games.

With Dareus being so effective right away, even against double teams, opponents will have to double Dareus just to keep him out of the backfield.

In turn, that will allow Williams to go against single teams a lot more.

In the end, as long as the Bills starters on defense stay healthy, offenses will have trouble moving the football in 2011

Buffalo Bills running back Fred Jackson for the last several years has proven to be the Bills top running back. Howver, that isn’t the case and Jackson’s situation shows how bad it is inside the Bills. 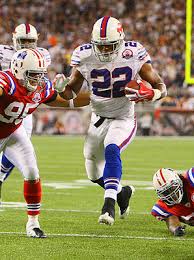 According to WGR 550, Jackson is upset with the team over the fact that he hasn’t been told anything about who is the starter right now.

“I’ve been saying it, I feel like a number one back and I should be treated like one.” Jackson said. “I should know what’s going on and know where I stand and what the situation is.”

Jackson feels disrespected, because he feels he has proven to the Bills that he is the clear cut starter and the team has yet to treat him like one.

Jackson is spot on as he has been one of the Bills most productive offensive players running and catching the football. Fellow Bills running back C.J. Spiller had a chance at the starting position last year, but failed to keep it and shouldn’t be given one until he proves other wise with the limited amount of plays he gets.

In the end, Bills head coach Chan Gailey better resolve this issue quickly, because if he doesn’t  it will tear his team up.

It is because situations like this I only do commentary.

They teach you in college when it comes to reporting a story you better have two sources. That way the story is accurate and the possibility of it being false is reduced to a minimum.

In regards to the Merriman story, that was flawed from the get go.

When I first read the story two thoughts popped in my head. Them being Merriman either got preferential treatment or the story is completely false.

It is not uncommon for NFL players to get preferential treatment. After all they are stars in society today.

However, in this case we are probably talking about something completely false.

Obviously, with Merriman entering the country with a lot of bags agents searched them according to proceedure.

What most likely happened is that some of the guys joked around that he must of had steroids on him and as the word spread through the employees it eventually turned into Merriman actually indeed have steroid.

In the end, reporters need concentrate more on the validity of a story instead being the person to break it.

The Buffalo Bills are in desperate need of a right tackle and now the Bills have an option available to them.

If the Bills were smart they would claim Stinchcomb off waivers as he is slated to make a $2.25 million base salary this year. That is half of what they offered Atlanta Falcons tackle Tyson Clabo, and Stinchcomb is only two years older.

With the regular season yet to commence the Bills still are third in line in waiver claims.

In the end, their decision on Stinchcomb will be a telling sign if the Bills front office already threw the towel in or not. 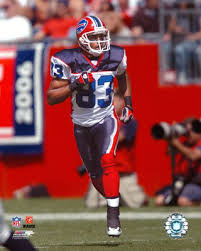 Many people view the Buffalo Bills as a team that has no chance of making the playoffs. The fact is one subtle move could put them in contention for it.

The Bills biggest problem for several years now has been the run defense. Even though the Bills drafted defensive lineman Marcell Dareus third overall in last April’s NFL draft, the Bills run defense will still be bad.

The main problem with the run defense is nose tackle Kyle Williams. Williams cannot handle double team blocking and that is a big problem for any defense.

What it does is that it allow one of the two opposing offensive lineman to release quickly and neutralize linebackers, which creates gaping holes in the line.

Williams isn’t a complete waste as he proved last year he can make plays against single team blocking. So, if the Bills were to move him to defensive end, and let Torell Toup and Kellen Heard battle for the nose tackle spot, the Bills could have a top 10 defense.

A solid defense would mean more opportunities to put up points. The more points the more wins they are going to rack up.

In the end, the Bills are so close to the playoffs, but are yet so far.

According to Pro Football Talk, Dallas Cowboys head coach Jason Garrett plans to coordinate with Denver Broncos John Fox on how things will go for their game on August 11th. The thing is all the coordination in the world isn’t going to prevent injuries from happening.

The idea is to talk and see how long each team plans to use their starters and come to some kind of an arrangement in order to prevent injuries.

That is the wrong approach, because each team is different. Some teams like the Green Bay Packers and New Orleans Saints won’t have to play their starters very long, because many of their starters are veterans and already know the entire playbook.

On the other hand there are teams like the Buffalo Bills who have a lot of young starters or had  a new head coach last year. That means very little, if any, of the starters will know the entire playbook, and will have to play longer in games.

In the end, head coaches need to go by what they feel is best for their team, and not what another team’s head coach wants to do.

Buffalo Bills owner Ralph Wilson is donating $2.5 million to the Pro Football Hall of Fame for the “Future 50”  Expansion and Renovation Project.

courtesy of the Associated Press via the Buffalo News

The donation is a great gesture by one of the great owners of the NFL.

Some may say that the move was just to help preserve his legacy now that he is enshrined in the Hall of Fame. That kind of thinking is far from the case.

“Pro football has been a major part of my life and the Pro Football Hall of Fame holds a special place in my heart since it is the institution that preserves the legacy of the sport,” said Wilson in a statement released by the Hall, according to Mark Gaughan of The Buffalo News. “This gift will allow the Hall of Fame to significantly improve its ability to preserve the historic documents and artifacts of the game for the benefit of current and future generations of students, researchers, historians, the National Football League, its member clubs and our fans.”

For proof, one only has to go back to the 2006 labor dispute where Wilson stated that revenue sharing has been an integral part to the survival of the National Football League, as it has allowed small market teams compete with large market teams on a regular basis. Apparently, other NFL owners must have heard those remarks as there wasn’t even a whimper from large markets about sharing unshared revenue in the last labor dispute that is just ending.

Also, back in the AFL days Wilson was the one that kept the Oakland Raiders from collapsing in the 1960s. As well as turned down numerous offers to move the team.

In the end, let me ask you this outside of Bills wide receiver Stevie Johnson, is there a Bills player and unrestricted free agent that really deserves monstrous amount of money that the top players in the NFL make?

Listening to WGR 550 and hearing Joe Buscalia talk about Buffalo Bills running back C.J. Spiller having to show something got me thinking.

What should we expect from Spiller?

Spiller last season rushed for 238 yards on 74 attempts. Receiving, Spiller caught 24 passes for 157 yards receiving and a touchdown. The thing is what people forget is that the Bills had running back Marshawn Lynch for the first four games of last year’s regular season.

What people forget is that the Bills run defense has been one of the worst in the NFL for several years now. That means the offense sees the football a lot less, that translates to less rushing plays for the running backs, especially if they are trailing.

Spiller should improve on those numbers. That means for Spiller’s season to be successful, in a backup role, he needs to compiles more than 600 total yards.

In the end, the time to get on Spiller will be when the Bills are winning and he has a bad game, but unfortunately those are far and few in between these days.